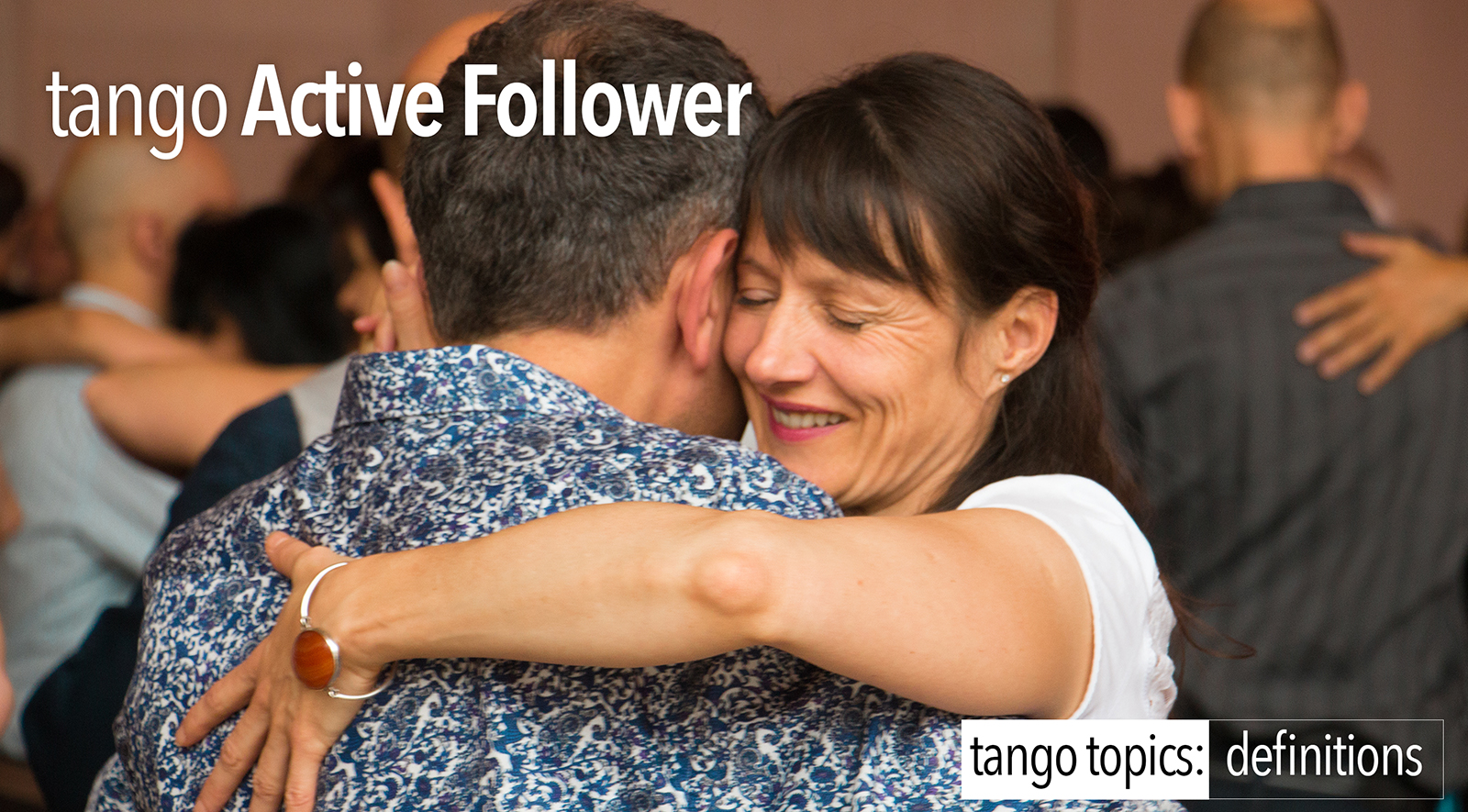 The Active Follower. You’ve more than likely heard this phrase, more than a few times, and no one has really explained it to you. There’s a good reason for that, it’s because one doesn’t necessarily exist. While there is a certain level of consensus on what an Active Follower can do, there’s no real school of thought on the topic. There’s no real, tangible, exercisable cadre of ideas and school of practice that one can readily point to and say “yes, that’s Active Following!”. It doesn’t exist. If it does exist it’s some black art that’s talked about in hushed tones. There’s a reason for this ‘hushed’ way, and that’s because up until recently the role of the Active Follower was nothing short of absolute heresy! People have a hard time remembering that it wasn’t that long ago that same gendered dancing was considered to be heresy and still is in certain places in the world. And more over that a women could learn how to lead! Again, pure heresy. So this is another one of those places in the practice of Argentine Tango where we see that we still have a long way to go, the role of the Active Follower is another one of those places.

Usage. Usually this phrase is used in concert with a Follower who has reached a state of being highly advanced. And sometimes it’s used in disparagement of a Follower who is trying out a few ideas that from a leading perspective seems willful, and/or wild, and uncontrolled by their (the Lead’s) measure.

Typically when people hear this phrase, they immediately jump to the conclusion that the Follower is taking control of the dance. This tends to scare the living sh*t out of Leads, and other Followers, who see it as absolutely heresy! While it is true that an Active Follower has this ability to control the dance, this is not their primary goal, nor should it be. As there are some rules that the Active Follower adheres to in order to keep things in check. Otherwise they’ll be perceived as the Wild or Willful Follower. Suffice it said, that a well trained Active Follower is in many ways like a Jedi Knight, and really a Jedi Master. “A Jedi (Master) uses the Force for knowledge and defense, never for attack (to misquote Yoda)”. The same is true of the Active Follower.

What is an Active Follower ? The answer is multifaceted: 1.) The ability to change X into Y with the barest hint, the slightest movement, and make the Lead believe that it was their idea the entire time without interrupting the lead. 2.) The ability to turn on and off, as though it were a switch, the musical accompaniment of patter, milonga, or an adornment, or an embellishment, and to place a movement that may not have been led but does fit within the motion that is being led while not interrupting the lead motion! Further still the ability to hit the upbeat, the downbeat, and the eighth/sixteenth notes in between if they want to. 3.) The ability to redirect the result of a lead to come out in a very specific place, without jerking, jarring, or force. 4.) The Active Follower executes with such subtlety, you’ll come away with this sensation of having seen god for the first time. Further still that the dance will seem effortless, easeful, and seemingly you can do anything with them. 5.) There is an intuitiveness that has been built up in them. They are able to sense and react to every situation that you can possibly throw at them and come out the other side as if nothing happened. That no matter what you throw at them, their reaction is one of not surprise but effortless control, precision, and containment. In many many ways they’re Aikido Masters redirecting the energy of their attackers against themselves and coming out unscathed. That is the Active Follower.

The Tango Topics Opinion: As indicated above, there are 5 types of Followers. Let’s get something out of the way. In order for an Active Follower to even exist. A few things should be present and one thing should not be present. In the should be present category: The skill set of the Passive Follower absolutely must be mastered. No if’s, and’s, or but’s about it. You can not magically arrive at being an “Active Follower” until you know what you’re being active about and furthermore, you can be active at all until you are clean, stable, and can consistently execute X, Y, and Z without interrupting or disturbing the lead (the action, not the person). In the should not be present category: A Lead/er! In order for the Active Follower to exist, the lead (the action) must create space for the Passive Follower to execute X, Y, and Z. This is a co-operative dance. Not a monologue! This is a dialogue we’re talking about here. A give and take. A call and response. Almost. However, that ‘response’ in the case of the Active Follower is a bit more like A series of questions. The Lead (the person, not the action), says “Where would you like to go ?” and the Follower says, not “Can we go here ?”, but rather “How about we go here ?”, note the distinction ? They’re both interrogatives, but one of them (the 1st one) is more a passive language question, giving up control. Whereas the 2nd one is all about maintaining that control and instead deciding in concert with the asker about what’s coming next!

You see this isn’t about control, it’s not about dominance as is so fearfully stated by so many leads, but rather about creating an environment that is co-operative and co-creating. This is as much about creating space for the Follower to exist as it is about co-creating a dance that can happen together on every level.

However, it should be noted, that a dance can happen as indicated above, but that dance will be marred by a host of physiological technical issues: Instability (which will cause both parters to miss things happening in the music because you’re constantly fighting to regain balance and stability). Pushing. Pulling. Tension. Force. Compression. And a personal favorite of Tango Topics to bash on – RESISaTANCE! Put simply while you can have a dance that is seemingly co-operative in nature, if it is marred by these things, then no…there is no active Following going on here, none. You’re fighting too many issues and missing more of the dancing part and the music part. The sad thing is that you will believe or think that you are an Active Follower and won’t know the difference that you’re not one yet!

Becoming an Active Follower is more about achieving a level of mastery and NOT using it! Much like Spider Man’s motto, “With great power, comes great responsibility”. The same is true of the Active Follower! The use of this skill is sparing and minute. Just a little bit can literally change the course and the experience of a dance from “arrrgh!” to “ahhhhh”. A dab here, a dash there, a nip there, a tuck here…a slight weight change in this direction, a repositioning of the shoulder in that direction, a millimeter step away, or towards changes the course of everything. This is the wisdom of the Active Follower: A Little Bit. This is a very powerful position to be in. To recognize that you have the ability to quite literally correct, change, and redirect your lead (the action), and then use that ability sparingly, gauging your lead, and only exercising the smallest barest hint of that skill just enough to move the needle in the direction YOU want the couple to go in. The trick ? Is that it will appear as though, if you do your job right, that it was the Lead’s idea the entire time!  #SocialDance #ArgentineTango #TangoDancing