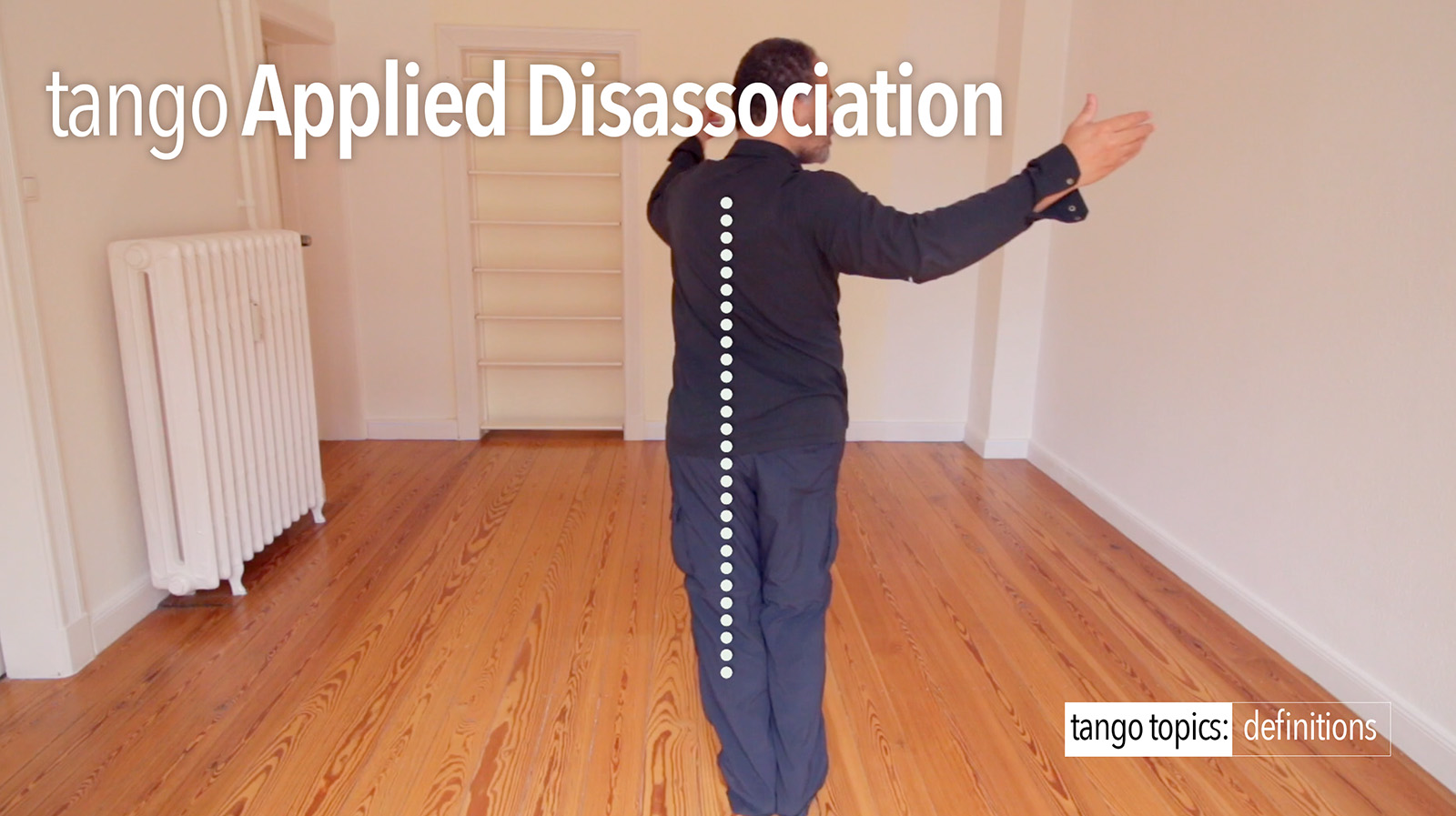 Usage. Applied Disassociation from a Tango Topics perspective means that typically when we talk about Tango Disassociation we are referring to the top half of the body (head, torso, arms, shoulders) rotating to the left or to the right, as one unit, around the spinal column of the dancer. Disassociation typically builds up and enormous amount of torsion, and as a result we must release that energy at some point. However, we want to release that torsion at a time and place of our choosing. That release is the a completion of sorts, the lower half of the body (hips, thighs, knees, ankles, and feet) catches up to the upper half. Typically we can use this motion anywhere where there is any kind of circular or rotational motion in the dance, as indicated in most Traveling Ochos, Circular Ochos, and most certainly Over-Rotated Ochos, as well as both Lead and Follower Molinetes just to name a few.

Clarity. The motion itself, and it is a motion, is not and should not be confused with a ‘Pivot’. It’s not a ‘Pivot’. This is a rotational motion to the left or the right around the longitudinal axial line of the dancer, and the release of the torsion that has been built up in Disassociation. While the ending result will appear to ‘pivot’ on singular point, the overall result is a controlled disjointed resolution.

Lead, Follow, or Both ? Both in this case. Either role can engage in ‘Applied’ Disassociation. This is not a Lead/er thing, nor is it a Follower thing, it’s a Dancer thing. Both roles use it, or should use it. However, a Follower will typically engage this idea more often than a Lead, unless the Lead is employing a lot of Lead Back Sacadas in their dance which is where you’d typically see this kind of motion.

Technique Video: Available for purchase ($12.99) or as part of the Tango Topics subscription service.

The Tango Topics Opinion: Tango Applied Disassociation is a skill that we should all develop and deploy on a regular basis, however it is frequently overlooked and underused and yet it is the one skill that absolutely sets a dancer apart. There is a proper technique for the development of this skill, and it starts with learning to rotate one’s torso independent of the hips (that’s the ‘Disassociation’ part) and then learning to release that torsion in a controlled manner (that’s the ‘Applied’ part). It should be noted that this motion will by its very nature release the build up of the enormous amount of torsion around the lower lumbar of the spinal column. There is a reason for the distinction here and it has everything to do with wanting to be exceptionally clear in where and how things are done and how they are described. That descriptive can help to identify problems and issues later on if and only if you are distinct in your language, ‘Applied Disassociation’ is that distinction. Along another line of reasoning, Applied Disassociation is just the bees-knees! It is the secret sauce that you want to employ in your dance that can literally change everything about what you’re doing and how you’re doing it regardless of role. #SocialDance #ArgentineTango #TangoDancing