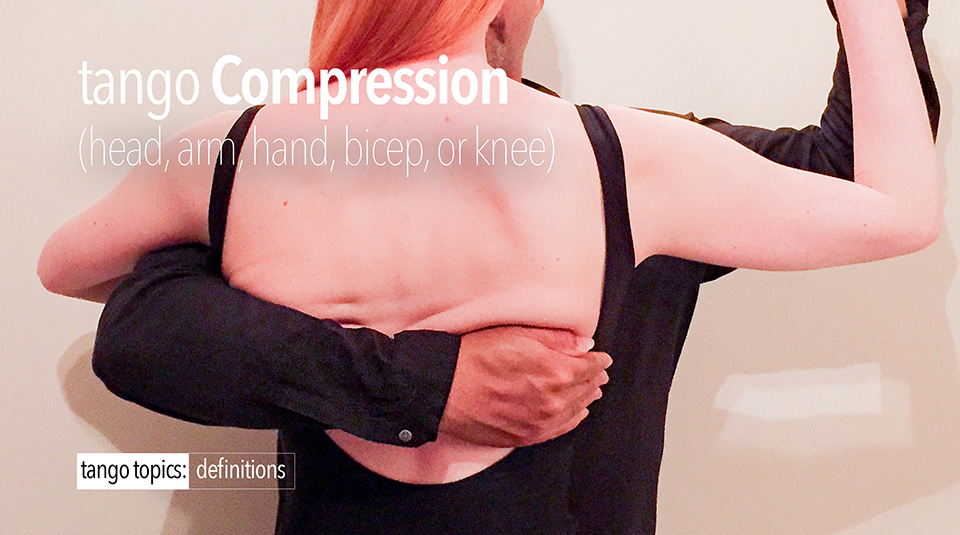 Tango Compression can best be defined in one of four ways. 1.) A constriction of the muscles of the knee, (or elbow) to build up ‘energy’ to be used to sustain a position, stance, and/or movement. 2.) A constriction of the muscles around the  elbow, or hand (and wrist) which is used as an indicator to either start or stop motion. Typically this is used as a way to communicate clear intent from Lead/er to Follow. 3.) Typically this is a felt as a ‘pull’ of one partner into the other. 4.) Laying one’s head onto the head of the partner, employing (unconsciously) the weight of their head onto their partners.

These are the 4 states of Compression. And all happen with great frequency. The reason they happen, is usually a less then desirable understanding and execution of technique, as well as poor kinesthetic habits that dramatically get in the way of hearing/feeling that said Compression is being used.

Usually Compression is seen in nearly all of the 8 kinds of Turns, for both roles as a desire to ‘keep your partner’ with you, and thereby Compression is used, with your arms and hands to do so. 🙁

Hand Compression is used as a way to stabilize our walk (both roles), in minute way, but it’s there. For a greater number of dancers they are unaware of this compression (hands mostly), due to the fact that they tend to land on the 5th metatarsal of the standing foot when they walk (forwards or back) thereby creating an instability, and then thereby requiring stabilization. Hand Compression can also be used as part of Forearm Compression, to ‘pull’ your partner into you.

Head Compression happens due to the fact that in the embrace, there is a desire to have physiological ‘contact’ with your partner, face or head to head.

Bodily Compression can and does happen for one of 2 reasons, either both dancers are employing a variation of Apilado, OR one partner is quite literally leaning on the other for support. While that support is necessary in either typical social Volcada and it’s variations, or the Social Colgada (and variations), it is not necessarily needed beyond that.

Bicep Compression is engaged by a good portion of Follower’s when they extend their left arm around their leads in any variation of Close Embrace without necessarily intending to do so.

The Tango Topics Opinion: Compression is a less than desirable affectation and execution of one’s technique. Meaning that it’s usage is a byproduct of poorly understood and executed physiological technique. Ideally we want to be independent of our dance partners and not rely on them for our stability, or to go around us (molinete or giro). While Compression can and does help us with our stability, we ideally want to be stable on our own without the need to rely on someone else. Compression in most forms described above can and does stop bodily motion, and tends to inhibit motion in general, and is not desirable at all in any way, shape, or form.