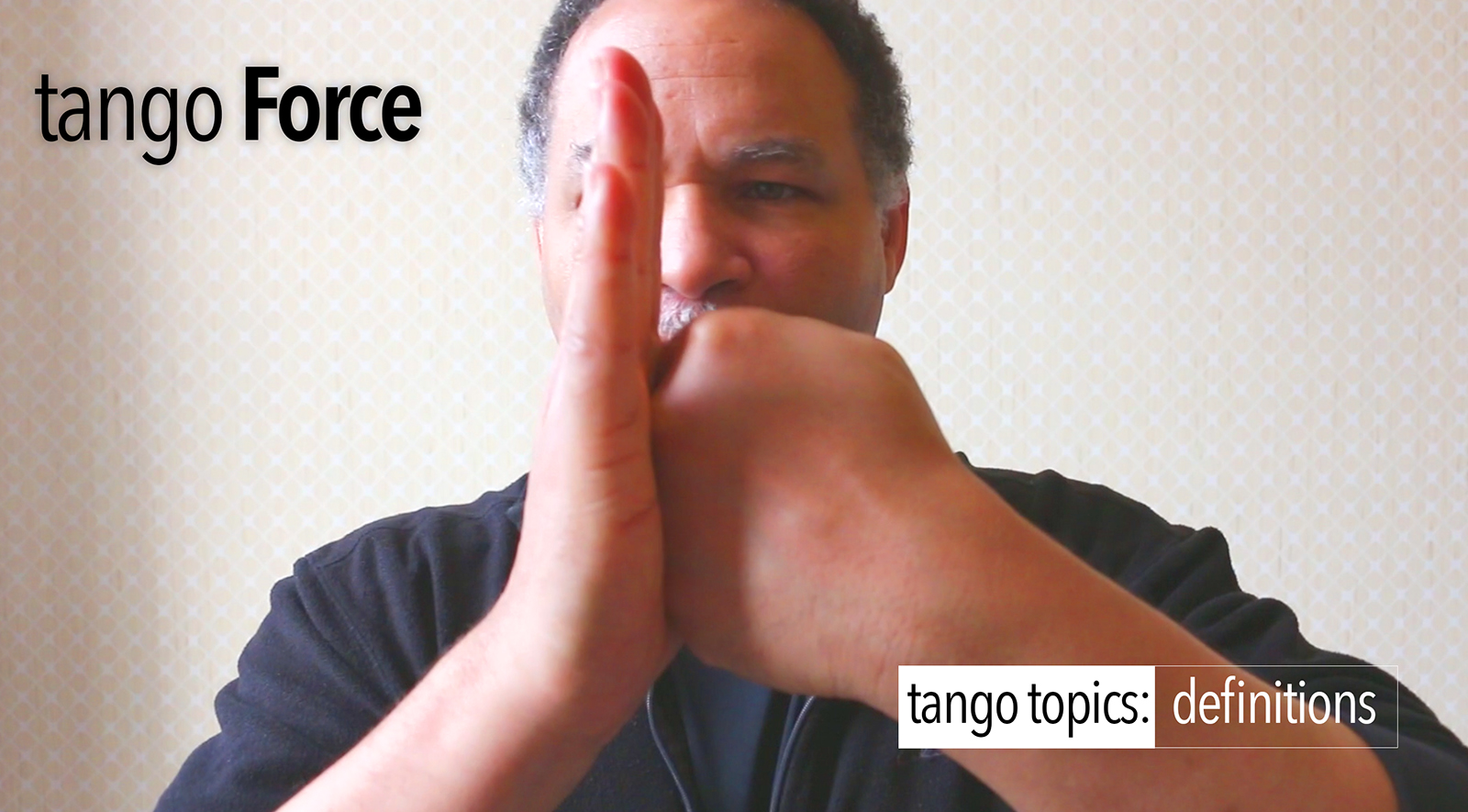 Force. If you’ve been paying attention to Tango Topics, and it’s predecessor Tango Truisms, then you’ve seen the link for the word ‘force’ repeatedly, but more than likely you didn’t follow the link at all. So today’s Tango definition fills out that link with a bit of text to clarify your understanding of what Tango Topics means when it says ‘Force’.

The English word ‘Force’ comes from the Latin word ‘Fortis’ which means Strong or Strength. There’s a noun form, and a verb form of the English word (usually used with an object). The noun form is very similar to its Latin roots which means “physical power or strength possessed by a living being” according to Dictionary.com. The verb means “to compel, constrain, or to oblige”.

Usage. With regards to Argentine Tango almost no one talks about Force. You will find it discussed in no class, no workshop, and certainly no private lessons, ever with any of the more popular brand of teacher with a few exceptions here and there. Force, however, is a component in Rigidity, and Tension. When Force is applied, it is usually used within the construct of the embrace. Open or Close Embrace. To maintain the visual look of the embrace. A shape. Most people believe or think that in order to dance with the embrace that you must ‘hold’ your embrace in a static position which does not and can not move. That in order to hold that embrace, the iconic shape of the embrace, that you must apply Physiological Force with the biceps, shoulder blades, and fore arms. Sometimes, very infrequently, Force is applied to the hands to create a specific shape with those as well.

The idea of ‘Force’ as it relates to Tango Topics and it’s usage is somewhere in the middle of the definition. It is at once dealing with Physiological Strength and on the other side dealing with Compelling someone to do something USING strength. And in specific as it relates to Argentine Tango this is done within the embrace usually by a Lead. While the Lead isn’t necessarily intending to use physiological force, it’s not deliberate, it is however used in impatience in their desire to move the Follower along to their insistence to execute X, Y, and Z in their idea of timely. Mind you that idea of ‘timely’ is frequently not in time to the music. It’s the Lead’s idea of execution of some piece of Tango Vocabulary (Molinete, Ocho, Cross, Volcada etc) that may or may not (frequently not) having any relationship to anything other than they’re speeding through to the next piece of vocabulary that they default to 3 times in a row or that they have no idea what to do next.

From the Follower’s perspective the engagement or usage of Force is usually done as a way to protect themselves from the excessive usage of physiological strength coming from the Lead (the person). So as a result there is rigidity, tension, and compression. None of which is required but is useful to preventing bodily harm.

Lead, Follow, or Both ? Both Roles employ this idea.

Tango Topics Videos: All Tango Topics videos discuss this most basic element as not needing to be there at all, in any way, shape, or form!

The Tango Topics Opinion: As indicated above, there is another way to move and to dance. And it does not require Physiological Force within the Embrace or strength in the embrace, anywhere at all. However, most people believe or think that they do need it. Further still they’re completely unaware that they’re generating this stuff to begin with.

There are a few reasons why Force exists. One reason has everything to do with your walk, and more importantly the fact that you are unstable. You don’t realize you’re unstable. You don’t feel that fact that you’re wobbling. You don’t recognize that you’re gripping your partners body parts to stabilize you (even Micro Force and Micro Stabilizations – This one usually occurs in the arm-to-fore arm embrace), BUT you are and you do all this stuff. This is as much as a Lead (the person, not the action) issue as it is a Follow issue. Both roles will end up using their partner’s embrace for stability, and as a result, they’ll end up either gripping with their hands, and/or clamping down with their arms (forearm and/or bicep) and/or elbow all at the same time without fully realizing that they’re doing it in the first place thereby creating force.

Still another reason why Force exists has everything to do with ‘Resistance’ (see the link). Some people believe that in order to dance that you absolutely must have resistance so that you can ‘feel’ your partners. While that may be true for them, what they may not realize is that a.) that line of reasoning is a fallacy. and more importantly b.) in order for the property of Resistance to function, one person has to OVERPOWER the other in order to communicate the intention of what is desired! Meaning the initiator of said resistance (lead) must use MORE FORCE than the person receiving that force (follow) in order for the vocabulary being suggested (ahem) to be executed!

Still one more reason why Force exists has everything to do with a lack of awareness. The fact is that you get used to using resistance so often, that you have been told to hold your arms here and there, and as a result you’re going to use it wherever necessary, to do X, Y, and Z. The kicker is that it is not required. Ever. The hard part is learning to dance without it. Just as a side note: Tango Topics Intensive Study teaches this way of dancing – that you don’t need Force, or Tension, or Resistance.

Lastly, one more place that it’s used is entirely intentional: Performance Based Tango. Or stage tango, fantasy tango, as it is sometimes referred to. Sometimes performers MUST employ tensile strength to do certain movements or to maintain a very specific position, or a very specific iconic look for the 15th row (assuming they’re dancing in a theater or for the stage). However, what you may not be aware of is that a good 8 out of 10 times, they do not need that tensile strength at all, it’s there for effect. Nothing more than that.

If some of this opinion sounds very similar to the definition for Tango Tension. You’d be right. That’s because they share a great deal of the same properties. So don’t be too surprised in reading one that reads like the other. 🙂 It’s deliberate.

So what this boils down to is you don’t need it. Stop using it, and lighten up in the embrace. Think feather lite, everywhere. There should be no force in the embrace with your arms at all, ever. It’s less work for both roles. #SocialDance #ArgentineTango #TangoDancing