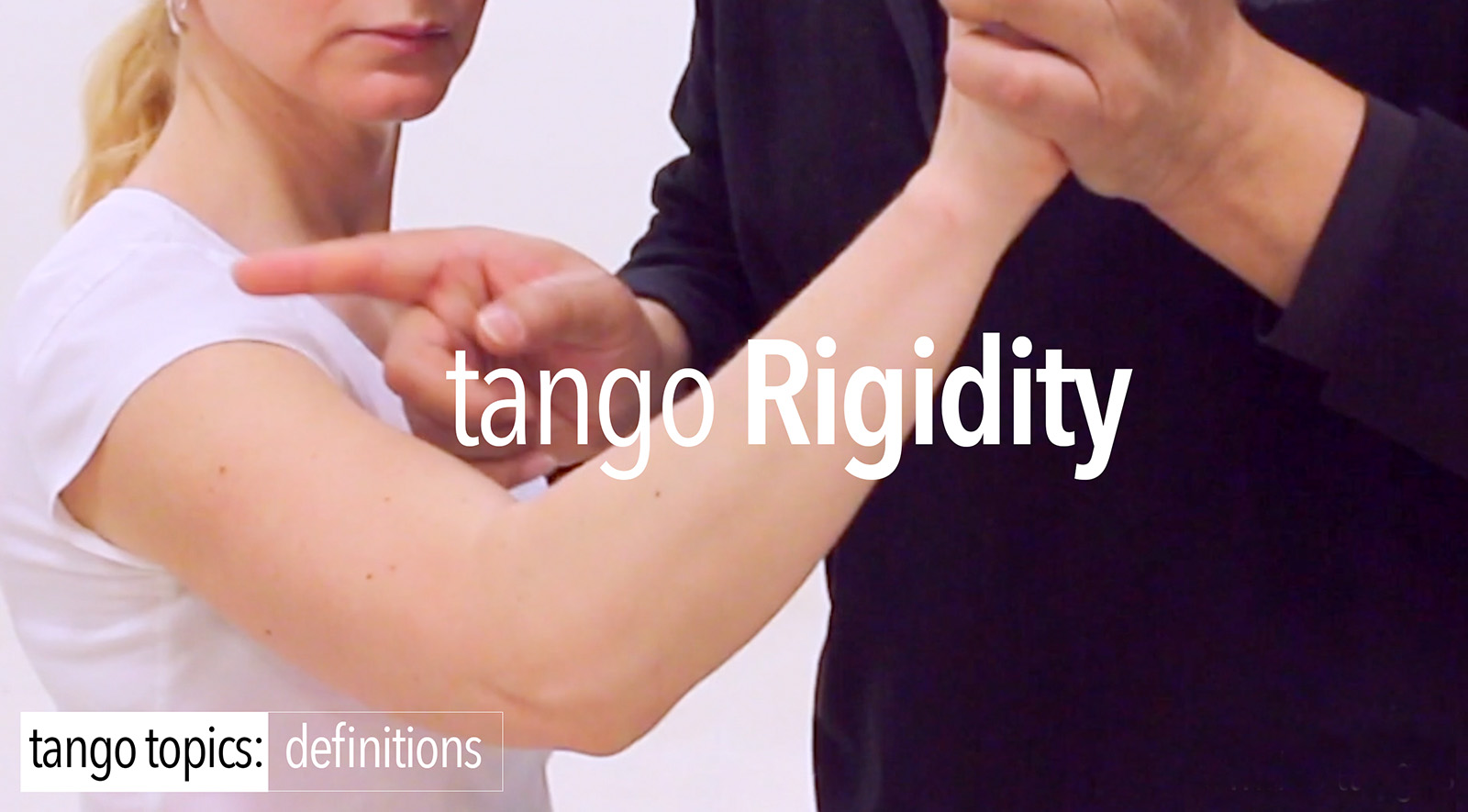 Rigidity. (pron: rij-id-it-ee) According to Webster’s Dictionary the word ‘Rigidity’ is an adjective that means to be ‘stiff’ or ‘unyielding’, ‘not pliant’, ‘inflexible’, ‘strict’, ‘firmly fixed’, and or ‘set’. It comes from the latin word ‘rigidus’ meaning to be “stiff” or in its conjugated form to “stiffen”.

Usage. We apply it in Tango as a way to keep the ‘frame’ of the embrace or to stiffen that embrace, to make it less malleable. To be fair this is not a Lead thing, nor is it a Follower thing, but a dancer ‘thing’. Both roles are susceptible to the effects of Tango Rigidity. For most people, it is something that either we are told to do, or believe that we are supposed to do (because we see it in others), in order to maintain the ‘embrace’, that without it certain things would not happen: 1.) The partnership would not be able to communicate effectively. 2.) the iconic look of the embrace would not be possible. 3.) The gendered roles don’t look ‘right’.

Typically Tango Rigidity happens as an affectation of lack of kinesthetic awareness. Meaning that unless someone points this stuff out you, you’ll stiffen your arms as if they were ‘tempered steel cables’, until someone says something different to you. One reason it occurs is out of fear, still another it occurs is unconscious behavior, still another is due mostly to stress. When we are stressed about X or Y occurring, we tend to tense up. And that tension is felt everywhere.

What you may or may not realize is that Tango Rigidity, when applied, forces (no pun intended) both partners to apply more force, tension, and resistance to overcome the original force of the standing Rigidity. So for instance, if you are asking for X out of your partner, and you’re being asked to apply resistance, you will need to apply more force to overcome that ‘resistance’ in order for X to happen. Is this desirable ? No. However it’s what happens, quite frequently. 🙁

To be fair there is a certain amount of stiffness that has to occur to keep one’s bones and muscles aligned in order to create the iconic look of Argentine Tango. That’s not what Tango Rigidity is about. Nor is it the common misperception that  must be a ‘firmness’ in the embrace, and that one must create that firmness in order to engage in communicating with your partner. Tango Rigidity is neither of those things. It is as has been state above, more than likely, occurring out of stress and it becomes so unconscious for us that we continue to use it as if it were there all along.

The Tango Topics Opinion: Tango Rigidity is something we need to keep a watchful eye on as it is a less-than-desirable aspect of engaging the Embrace (no matter which one you employ). While there is a useful aspect to Tango Rigidity, being that it’s something to avoid, there are mostly harmful effects of its presence. It can, and frequently does, create a way for us to move that is not desirable, that is more work than we want it to be, and then our egos get in the way of hearing anything that may run counter to that way of moving. We want to work less, not harder. However, learning this takes time, patience, and lots and lots and lots of reminders. Meaning that it may take years for you to hear this stuff and then to be able to remind yourself not to do it. There are stresses at work here that you are unaware of, unconscious of, and that until you identify those stresses you will continue to use Tango Rigidity as a way of moving or dancing. #SocialDance #ArgentineTango #TangoDancing