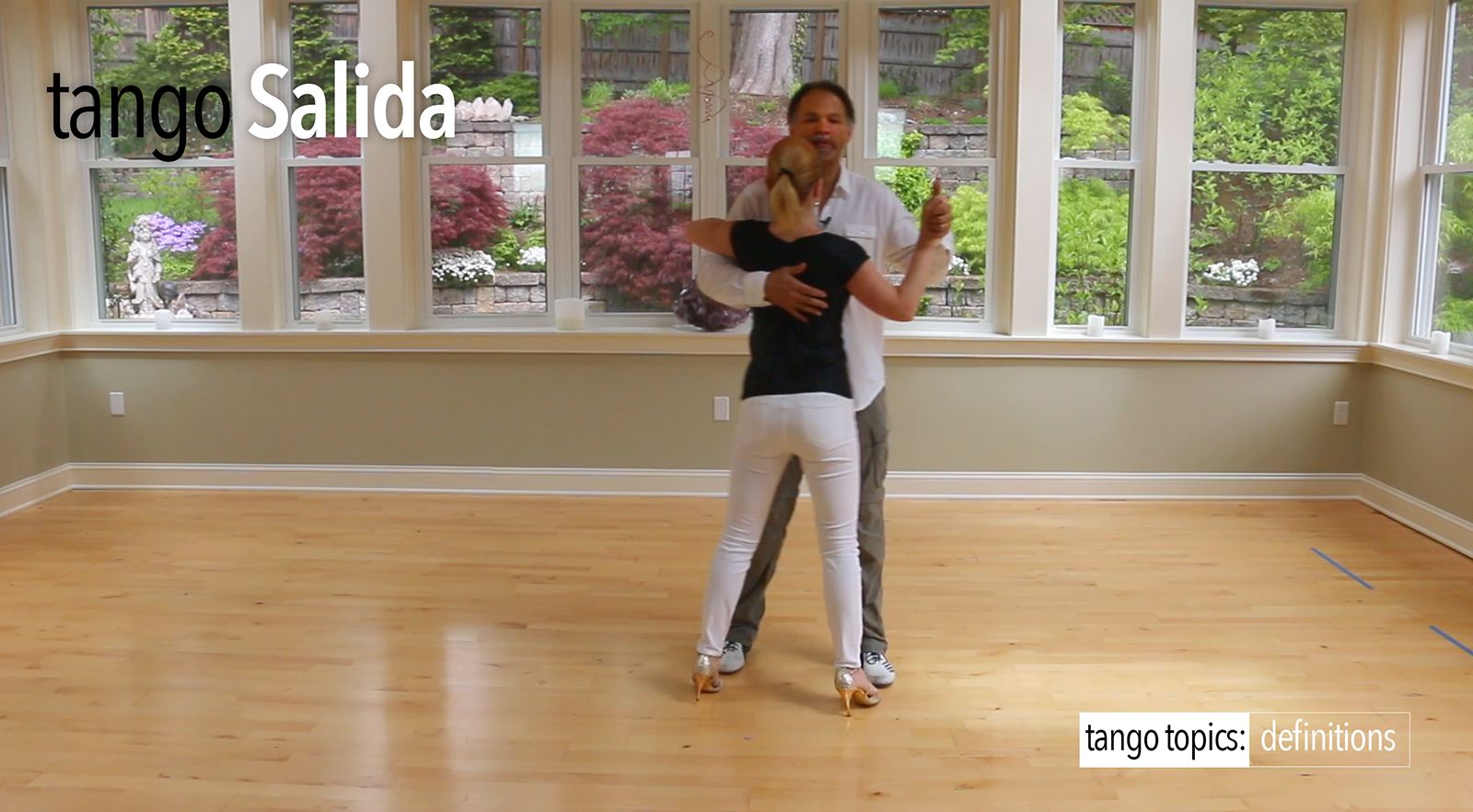 Salida. (pron: sah-lee-dah) According to Webster’s Spanish Dictionary it is a feminine noun which when translated to English means “exit”, “departure”, “leave”, or “left”. The word comes from the Spanish noun, “Salir” which means in English “to leave”.

Usage. Argentine Tango defines this word to mean a host of practices that can and do happen at the beginning and sometimes the ending of a song and tanda. Historically the word is defined, again from a Tango perspective, to mean a specific step that is done to indicate that we are dancing now. Typically this step is a step into the line and lane of dance. And typically this is done at the beginning of the song, and really the tanda to enter into the line and lane of dance. This is the entry point for a new couple entering the floor.

Clarity: Typically most people think or believe this refers to a simple side step into and out of the line and lane of dance. It is much more than that.

Lead, Follow, or Both ? Typically this is a Lead thing. Meaning that the Lead will invoke this upon the Follower.

Technique Video: There is no specific video on this vocabulary element, however, the Social Colgada, Single Axis Turns, Social Volcada, and the Dark Side Salida, all contain the element as it is part of the vocabulary video. Please see the bolded links for each article, and the price links for direct links to the product videos. 🙂 YMMV.

The Tango Topics Opinion: The Salida can be a very elegant way to enter and exit the dance. However, most people are thinking solely of the singular ‘step’. Truthfully the ‘Salida’ step itself is actually a series of steps. While the common one is the Side step into the active lane of dance, there are others, such as the Dark Side Salida mentioned above. However, still another, less common is the Argentine Cross. Fun Fabricated Fact: The Cross was originally a method of saying to a Follower “Do you know Tango ?”, and if they did then their response was “Si, Por Supuesto!”. Factually speaking this may or may not be true as there is no evidence, it’s yet another story that is told about the Salida step itself.

The reality is that the Salida is actually a bunch of practices, not just a ‘step’ but in fact it includes the Cabeceo/Mirada practice, the walk around the floor (not across … tsk, tsk, tsk) to your partner (if you’re the lead) and/or waiting to be picked up by your partner (if you’re the follower), guiding your partner to the floor, as well as the askance to enter the line and lane of dance, as well as the first step of the dance, and the very last, and then as the tanda is over guiding them back to their seat. This is know as The Salida Practice, which encompasses this entire thing we know as ‘The Salida”. YMMV.