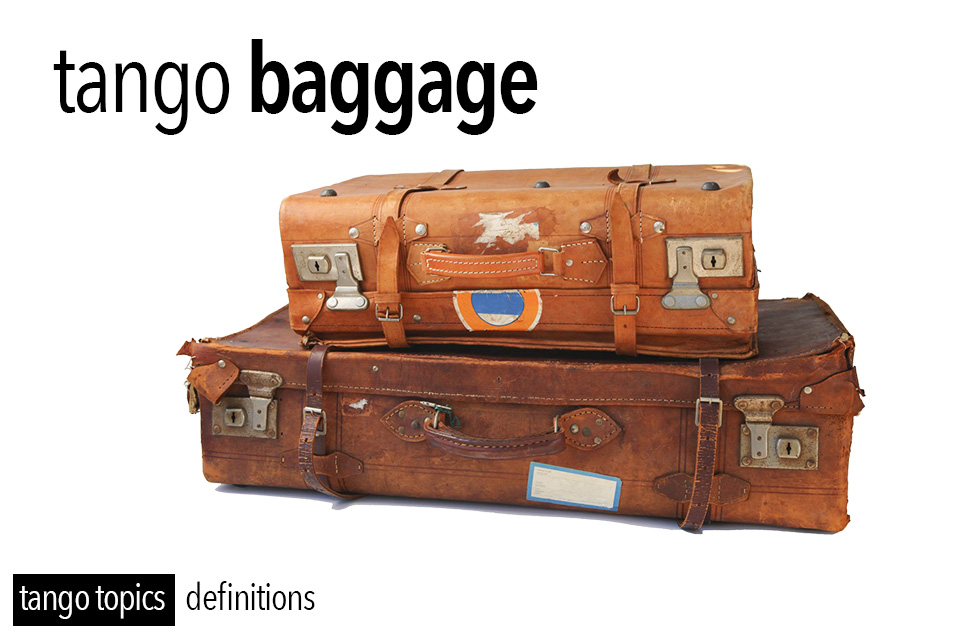 The community you dance in regularly where you see the same people, dance with the same people, once or twice a week at minimum, and more if you’re studying with the same teachers they study with. You see them so much that Cabeceo as an art form has been reduced to “Hey!”, and off you go! This is what some might call ‘Familiarity’. This ‘familiarity’ has a plus, and a minus. The plus is that you have built-in partners, you know them, they know you, and they become your standards, and you theirs. The minus ? Tango Baggage.

What is Tango Baggage ? It’s that same familiarity but with a difference. The difference is that you are a known quantity, all of your errors, all of your foibles, inconsistencies, areas of concern, personality quirks, all get rolled into one. The room already knows who you’re going to pick to dance with, what songs you’re going to dance to, what will attract you, what won’t, when you’ll comment and about what. They know when you’re going to do X, Y, and Z, and to what style of music, and in a lot of cases when in a piece of music! It becomes wrote after a while, the whole room has your Modus Operandi! This applies to both roles, not just Leads!

However where Tango Baggage takes on its core meaning is in the execution of vocabulary, and technique (or in a lot of cases, less than desirable technique). Tango Baggage refers to the fact that your execution of X, Y, and Z (leading or following) and more importantly the technique by which you execute has left you with a reputation. Frequently that reputation is generally not a good one. Tango Baggage stays with you for years and years, and it almost never goes away. Almost.

There is an instance under which your Tango Baggage can be changed and it comes in two parts:

1.) Studying with a different teacher who will restructure your dance on every level, and not just give you new steps, patterns, and figures. Rather, they’ll deconstruct your walk, your embrace, and then reorganize them, change them for the better, and then add details, greater clarity, sharpness, force you to control what you’re doing instead of the willy-nilly that you’re doing now.

2.) It means jettisoning your existing dancing circle of dancing friends and cross-grading it for a better class of dancer, slowly. It may mean traveling from your local scene to another, on a regular basis.

All of this is easier said than done, especially if your teacher isn’t going to show you off at local practicas and milongas! It can be done though, it just takes a while to remove the stigma that you’ve been carrying around for years. It’s a change from Tango Baggage into something else – Tango Desirability. That baggage takes time to eradicate from people’s minds. Because they’ll still have the same perception of you the more that you dance with the same people over and over and over again. If you want change, then that means that you have to change how you approach the dance, and who you dance with. You’re expecting to continue to dance with the same people, and expecting different results…hmmmm… huh ?

This sounds mean or harsh but is a necessary evil of to getting to being a ‘better’ dancer. The process doesn’t mean that you can’t dance with those people anymore, it just means that you more than likely won’t want to! Which is to say that once you’ve had a small taste of ‘better’ you really won’t want for anything else. This 2nd part takes patience, and time. Lots of patience.

And one more thing, if all of this sounds like working towards perfectionism, arrogant, or being perfect. That’s not true, or a desirable way of thinking about this. This idea is really about cleaning up what you’re doing to make it visually and kinesthetically desirable to everyone that you’re dancing with and want to dance with. So that in the end you have more fun, not less! The first part of change is recognizing that something needs to change the hard part is doing something about it. 🙂