The Birthday Song Idea/Practice/Thing/Dance. From time to time, someone or several someones in attendance will be celebrating their birthday(s). And as a result sometimes, the Milonga organizer may want to celebrate that day with a ‘Birthday Song’. For those of you that know what this practice is, you can tune out now. For those of you that don’t know what it is and why it happens, and/or what you should do with it, Today’s Tango Thought is for you. 🙂

What is a Birthday Song ? Put simply it’s a song that the DJ chooses, usually a very familiar Vals that has been played 10,000 times. In this community practice, the milonga of potential dancers and dance partners queue up for an opportunity to dance with the a birthday recipient(s) for the length of the Vals. Typically said vals is about 2 minutes and 30 seconds in length, and if each person in the queue gets 10 seconds, then that means the birthday recipient can get in about 15 possible partners.

The practice goes something like this: The potential partners queue up for their 10 to 20 seconds of time of dancing with the Birthday recipient(s). Depending on the recipients gendered role and their skill level, and their role swapping ability, they may swap roles and dance either role. But for the most part the recipients tend to dance their gendered Tango role. Each potential partner will dance with the birthday recipient for about 10 to 15 seconds at maximum. The next partner in the queue will walk out on to the floor and trail the couple dancing when they feel they’ve been ‘danced’ enough, and then tap the dancing partner on the shoulder, they’ll exchange (gracefully) positions, and the next person will dance for their 10 seconds and so on. This partner swapping will continue until 1 of 2 things has occurred. a.) The song has ended. or b.) There are no more partners to swap! 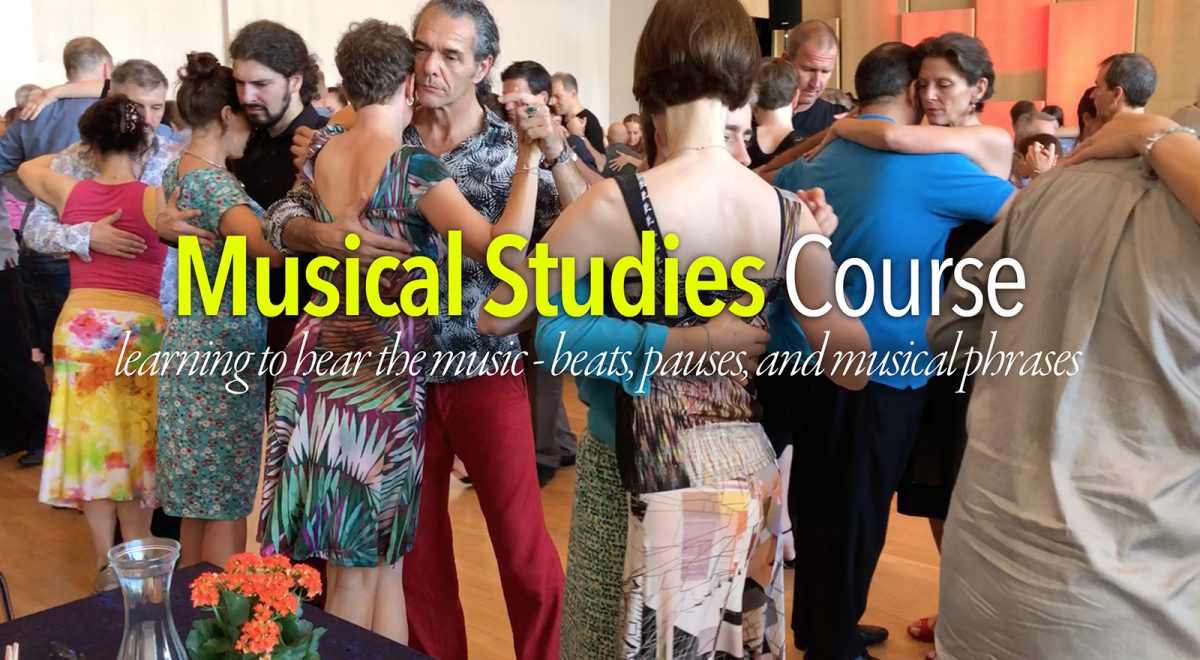 Have you seen our Full Musical Course ? It covers the Beat, On Beat, Off Beat, The 5 Musical Pauses, Tango Music History, What to Listen for, How to Listen, and includes 14 Days of Tango Music, then 30 Days of Intensive Music, and more! For Leads & Followers! Take Your Musical Understanding To A Whole Other Level!

bob was mr. boleo. he subscribed. now he walks & his partners love him.

The Benefits of a Birthday Song. There are a few, but important, benefits to having a Birthday Song for one or more people at the Milonga. 1.) From an organizational position, the Milonga Organizer can use this as a way to advertise the weekly Milonga. “It’s Miles’ Birthday, Come and Dance with him into the wee hours!”. That sort of thing. 2.) It’s a way for the Community to come together and support one of their own. 3.) It’s a way for the dancer to feel connected to more than just their regular staple of dancing partners but instead the entire community or whomever is at the Milonga! There are a few more reasons why a Birthday Song is a good idea but those are the most common ones. So if you’re thinking of instituting this idea at your local milonga, you should read on a bit before making the leap. From a personal perspective, a birthday song is really a good thing for you on multiple levels, but probably it’s best is that it brings out your regular staple of dancers, and gives you an opportunity to dance with them all in one place at one time! Frequently we don’t get to dance with all of our desired partners in a single night, so a birthday song is a really good way to make that happen. Or at least get a tiny little taste.

The Detracting Factors of a Birthday Song. Sadly there are a few reasons why a Birthday song is not a good idea. 1.) Some people really don’t want to celebrate their birthday with a room full of people. They feel obligated. 2.) There are some people that will detest the idea of being forced to dance with someone they don’t want to dance with, or whom they’re actively trying to avoid and now they’re faced with having to dance with that person. It would be socially awkward to either turn them down or have to dance together. 3.) There are people who see the birthday song as the only opportunity to dance with someone that wouldn’t ordinarily dance with, and this is their only chance. Talk about being put on the spot! 4.) The birthday song tends to break the flow of the Milonga. 5.) Watching OTHER people dance which isn’t quite a performance, which isn’t quite polished, and isn’t quite…ummmm, nice to watch. The pushing, the pulling, the squeezing, the hanging, the dragging, the ungainly legs and feet, not to mention head tilt issues. And let us not forget the fact of being offbeat or no where close to one. Thankfully floorcraft isn’t a factor here because they have the whole floor to dance all to themselves. It can be unsettling to have to watch someone else on display. 6.) Some people don’t feel comfortable with the whole room watching them dance. Even though this happens every time they go to a Milonga, everyone sees them dance. The whole room knows how they dance, who they regularly dance with, so it should be no surprise. The only difference is that they’re now the center of attention and they’ll feel a little uncomfortable with that attention level.  7.) IF there a multiple birthdays being celebrated it can feel a little like a round robin and at the same time, a popularity contest! And that may make it rather lopsided if one person is very popular and another isn’t…talk about awkward social situation. Oops! These are just some of the reasons why celebrating a birthday with a birthday song may not be a good idea. YMMV!

registration is free, costs nothing, and takes 2 minutes.

Have you seen any of our Foundation Series ? It’s over an hr (8 videos) of Foundation Technique covering your Extensions, Feet, Posture, Embrace, and the beginnings of your Walk, and much more….

milonga madness and a gold subscription together = 🙂

Tango Topics Opinion. For the most part, a Birthday Song idea is a good proposition if and only if boundaries are not crossed and the person(s) being celebrated are ‘ok’ with being the center of attention. If neither of those things are true, then you risk social awkwardness which can be a bit edgy at times. So a good rule of thumb is if you’re a Milonga Organizer and you know it’s X’s birthday, ask them ahead of time if they’re ‘ok’ with a birthday song. Generally people tend to respect that it’s X’s birthday and that this is not the time to create a socially awkward situation by dancing with someone that doesn’t know you or that you wouldn’t ordinarily get a chance to dance with. Generally. However, there are some folks that don’t necessarily get that social ‘hint’ and will think, “Well it’s their birthday isn’t it ?”. Well yes, pinhead, it is, but the social codigos still apply! All bets are not magically off simply because it’s their birthday. They still probably don’t want to dance with you. So….ummmm…not so much with the birthday dance! But some people don’t hear that, and they’ll try anyway. Most people are gracious about having to endure a dance they know is going to be painful and thankful that it’s only 10 seconds of awful pulling, pushing, squeezing and hanging. There are some people that would rather have root canal than have this experience, so you need to be aware of it and respect their wishes.

The Birthday Tag. There is another way to celebrate the Birthday Song/Dance that you may want to investigate that is loads of fun and isn’t quite so off-putting for everyone and is exceptionally inclusive. It’s a variation on a theme really. It’s called Birthday Tag. This is where the birthday recipient(s), start out dancing with each other or their birthday queue, and then as the queue fills, as each person dances with birthday recipient(s), the person leaving the queue grabs someone else not in the queue and dances with and then completes the song. This way the entire room ends up dancing. The only downside is that the line of dance gets a little crazy and discombobulated because of the comings and goings of things. But it does tend to make the whole room dance, and that is the important part!

Having said all of that YMMV with the Birthday Song Experience.

Register (Free Stuff!!) or Subscribe (Cool Stuff!!!) to Go Deeper with your Dance!