Berlin Embrace. This is a Tango Topics construct, and an observation, of what sometimes (operative word in the sentence) has been observed happening while dancing in Berlin, infrequently. This is not a taught style of dance. There are no classes, or workshops, or anyone that Tango Topics knows of that talks about this way of dancing. It is an artifact, or an outgrowth, of what is happening in Tango in Berlin. This definition does not support, codify, encourage, disparage, or disqualify this way of dancing that some people engage in. It is merely an attempt to put a name to what you will sometimes see happening on a social dance floor in Berlin.

To be absolutely clear, so that we don’t get heaps of email about this stuff: a.) There are many lovely dancers in Berlin who engage in a wide variety of styles and ideas of the embrace. b.) Just because this is here, does not mean that if you go to Berlin you will encounter this all the time. NO! Get that though right out of your head. This is only an observation.

The Berlin Embrace, is an postural position very similar in nature to a Vee Embrace format where the partnership is at an angle to each other. Only in this case, the partnership’s hips are away from each other, and their bodies are broken at the waist (slightly), and tilted forward. The partnership’s head’s usually touch (see Head Tilt), sometimes with a great deal of pressure, sometimes not. Frequently the Lead’s head is pointed at the floor watching the Follower’s feet.

While this is being titled as a ‘Berlin’ style of the Embrace. It should be noted that you’ll find this in many places outside of Berlin as well. It just so happens that this particular variety was first spotted in Berlin by the author of this page, and that’s how it got it’s name. If we had spotted this happening in San Francisco, or Moscow, or London…it would have been called that. But instead, Berlin got the nod. Watch the video below. Apologies to Berlin. 😉 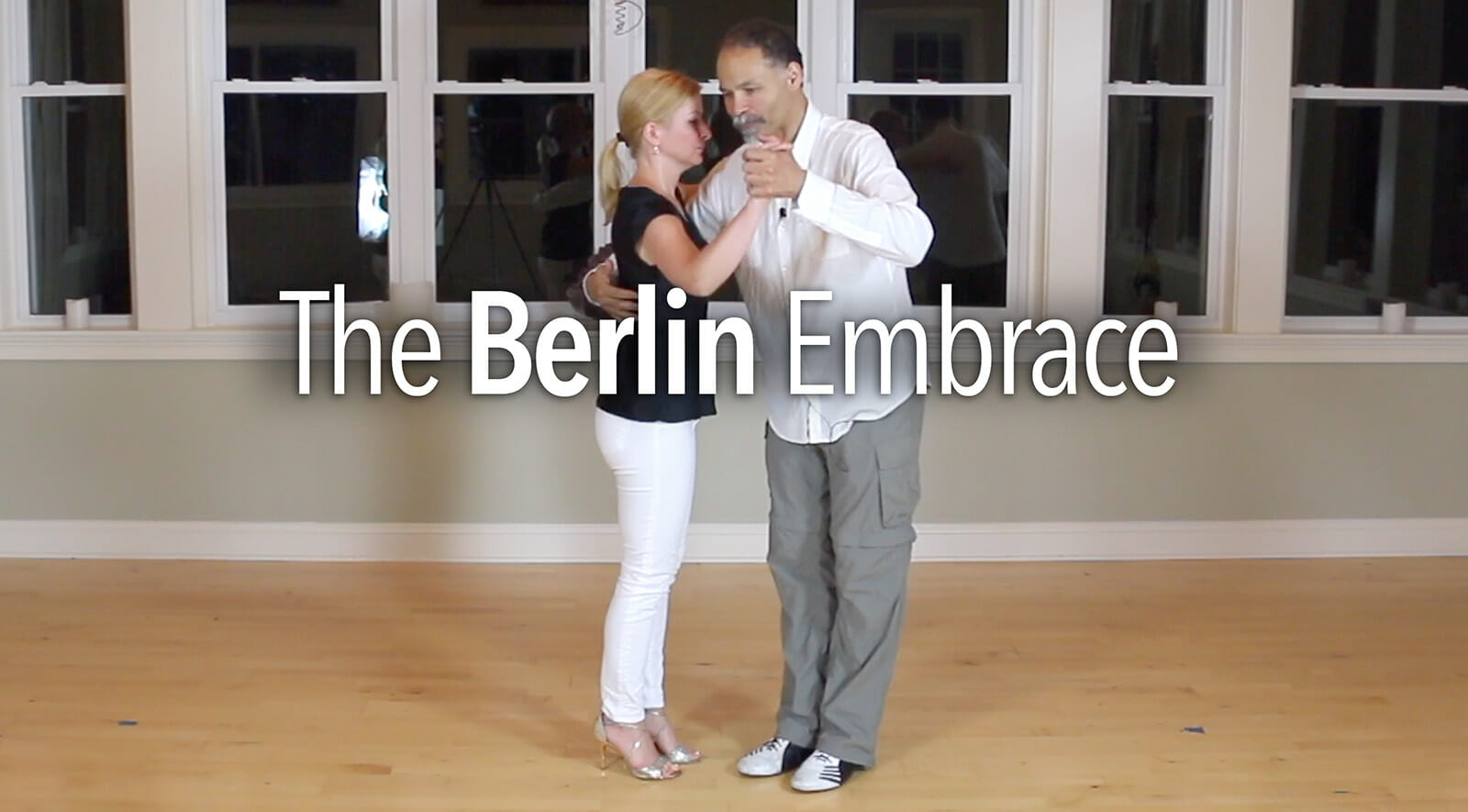 The Tango Topics Opinion: This is not a desirable way to dance for a variety of reasons, not the least of which is that it’s mostly painful for the Follower in two ways Head Pressure and Lower back pressure from the Lead’s right arm. Another is that the lead’s posture here is creating a visual line and relationship to their partner that accentuates the Lead and not the couple. And we want to accentuate the couple and not the Lead. Which is to say drawing attention to the Lead (the person, not the action). Lastly, the Lead’s posture here can be uncomfortable over long periods of time, and if not corrected will result in vertebrae disk issues later on in life.
Related Articles:
« Back to Glossary Index
Related Terms: