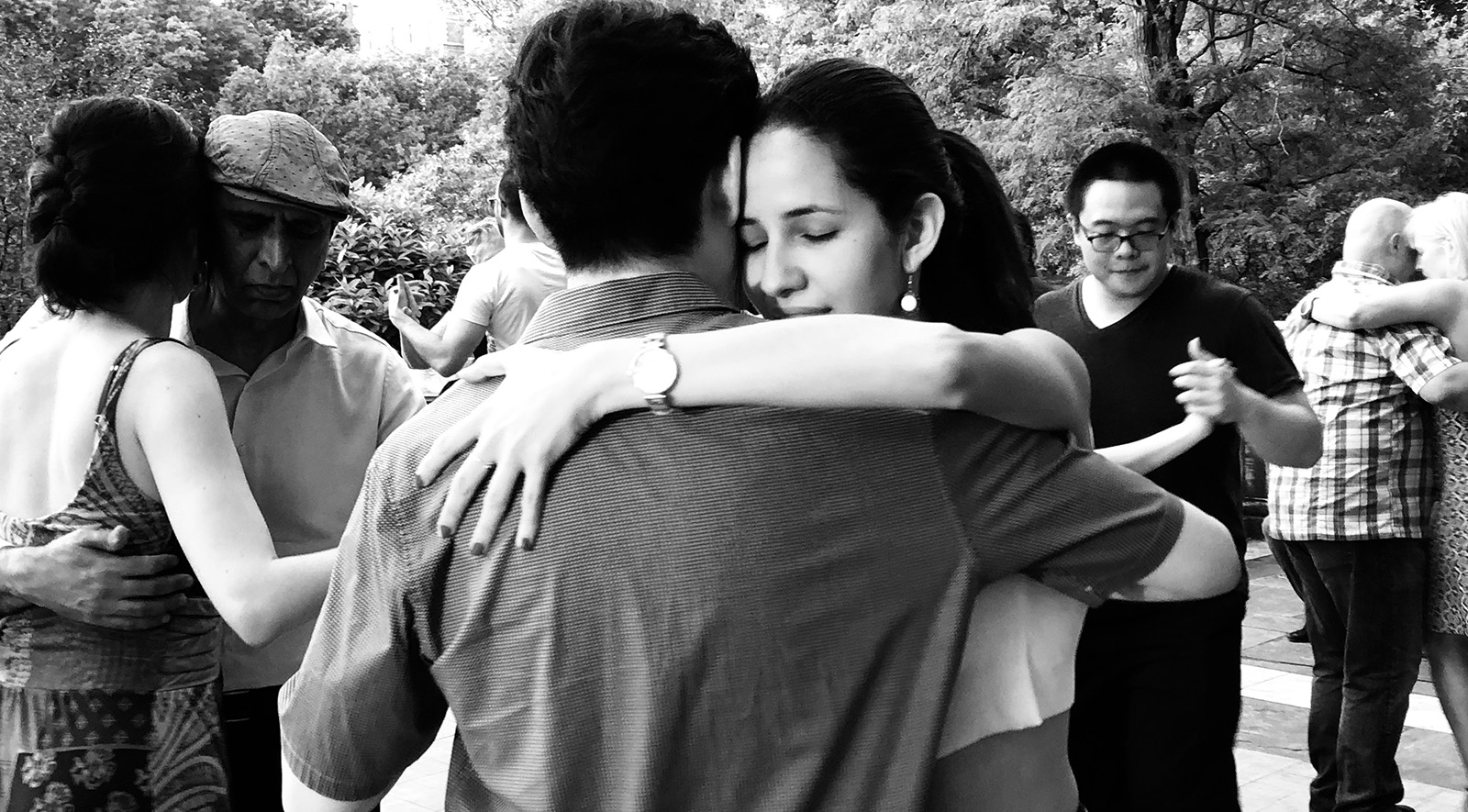 The word “Entregarse” in Spanish, especially its street usage, has no actual translation to English. The word typically means “to surrender” in English. And it’s not quite right, nor is its street usage, “to give in”. Something is missing…

The verb is typically conjugated to it’s 3rd person singular and becomes “entrega“.

The verb means, when applied to Argentine Tango inside Buenos Aires: “What can I contribute of myself to make this the best dance ever ?”. Note the verb there…’contribute’. It has a slightly different connotation than to ‘surrender’ or ‘to give in’. And even this is also not entirely correct, because it’s not complete. Again, it’s missing something. A very important something. The reason it’s not complete is because the verb is actually a reflexive verb, like so > “EntregarSE“. That SE ending means that the verb uses an Englishism “Of one’s self”. Meaning that it’s turned back on itself! So to complete the definition, it doesn’t mean ‘to contribute’, it means ‘to contribute of one’s self’ or ‘to contribute of myself’.

Entrega literally means “What can I contribute of myself ?”.

Inside BsAs, this way of dancing is taken as “Por supuesto”, or of course! Outside of bsas, the idea is almost unheard of, especially in the United States, Europe, and in Russia, Turkey, China…anywhere that’s not BsAs. Only those people that have gone to BsAs, spent years there on a regular basis, and have gotten into the scene, sitting with the maestros at their tables at La Viruta at or Salon Canning or any of the barrio Milongas will almost never hear this word in passing, and only in between bottles of champagne, and not even that. The reason it’s not heard, it’s because, again, it’s just a given in BsAs. This is what should happen and doesn’t need to be discussed. However, those teachers that travel from BsAs to the rest of the world, have found that almost no one has heard of this idea, and that they have to explain it to anyone that studies with them. What they took for granted in BsAs needs to be explained. And sometimes that explaination goes horribly wrong for a wide variety of reasons.

Side note: The idea of Entrega based dancing has been co-opted and mistakenly commingled to create a misunderstanding in certain people and Follower in specific, that they wanted to surrender themselves to the dance. This is where the hanging on one’s L/lead comes from, the pulling, pushing, compression, and what not comes from. Well at least one aspect of it, not all of it, but a good portion of it comes from there.

Why is any of this relevant ? Most non-bsas based dancers dance with the idea of (whether they realize it or not) “what am going to get out of dancing with X ?”, “Am I going to be seen dancing with X”, “If I do this move, I’ll show that I’m a good dancer and then the better dancers will want to dance with me!”. There’s no nice way to put this so that you’ll hear the message > This way of dancing is dancing for the self, and not for the couple, and not for the room. It is selfish dancing. It is dancing to be seen instead of dancing with one’s partner.

The idea of Entrega based dancing is not taught anywhere outside of BsAs. And even in the barrio milongas in classes, the focus is always on the technique of X, and the step/pattern/figure to the music. The reason this is so is because the figure is for the tourists. But because the teacher just assumes that Entrega is a given, they don’t explain it to their students. So this idea never gets communicated at all.

It’s quite easy to believe that if you focus on Entrega alone that technique, vocabulary, floorcraft, and musical interpretation isn’t important. Not. Nor should one take away from this idea that if you just give of yourself to the dance that the dance will magically happen. No. That’s not true either. Technique, Vocabulary, Floorcraft, Musical Interpretation, and Entrega are all EQUALLY IMPORTANT and must be pursued with equal zest and zeal.

So to wrap this all up in a nice tidy little thought, when we apply the word ‘Entrega” and its action to dancing, it changes the selfishness factor that happens in every tango community from being an ugliness to something as a gift that we’re each giving to our partners and the room at large.

That would be an example of Entrega based dancing…